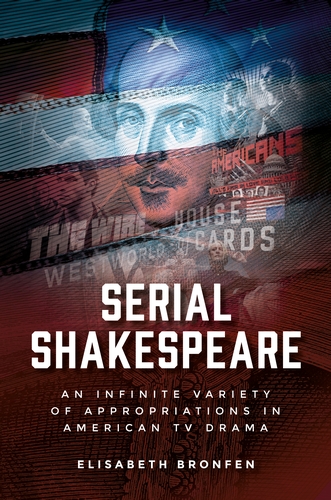 Elisabeth Bronfen's newest book, Serial Shakespeare, delves into the afterlife of the Bard's work in contemporary media culture. Published by Manchester UP in October 2020.

List of books, edited collections, and articles by Elisabeth Bronfen.

List of of keynotes, lectures, presentations by Elisabeth Bronfen

Elisabeth Bronfen is Professor of English and American Studies at the University of Zurich and, since 2007, Global Distinguished Professor at New York University. She did her PhD at the University of Munich, on literary space in the work of Dorothy M. Richardson’s novel Pilgrimage, as well as her habilitation, five years later, on representations of femininity and death published as Over Her Dead Body: Death, Femininity, and the Aesthetic (Manchester UP). In 2017, she was awarded the Martin Warnke Medal by the Aby Warburg Foundation, and in 2018, she was appointed as an Ambassador of the Friedrich-Alexander-University.

A specialist in the 19th and 20th century literature, she has also written articles in the area of gender studies, psychoanalysis, film, cultural theory and visual culture. Her recent monographs include, amongst others, Specters of War: Hollywood's Engagement with Military Conflict, as well as a book on Mad Men and the American Cultural Imaginary, Crossmappings, a collection of essays on visual culture, a collection on Hollywood and the American project, and a series of conversations with Siri Hustvedt. She has also published her cooking memoires under the title Obsessed. A Cultural Critics Life in the Kitchen (published with Rutgers, can be ordered here). For a detailed list of publications, please see here.

Current research projects include a monograph on appropriations of Shakespeare in contemporary TV drama, Shakespeare and reading for seriality, Seriality and 21st century DVD-novels, and the gender of political sovereignty. For a detailed list, please see here.

Please contact Prof. Bronfen directly to make an appointment. During term, office hours will take place on Wednesdays from 15:00-16:00.

The syllabi of Prof. Bronfen's current and past courses can be found here.